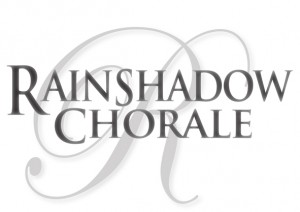 On a cold rainy night in early 1997, a handful of determined and talented musicians got together to talk about creating a small ensemble to sing serious choral arrangements. The idea was to have a hand-picked, top notch ensemble that would tackle tough music, and with this spark of a notion, the group invited others to join. They pulled out music they’d collected and in that moment created something wonderful.

Small concerts sprouted up out of this, and for the next few years directing was shared by various singers of the small fledging group and it began to grow in numbers and passion becoming the foundation of RainShadow Chorale.

By 2001, the group numbered fifteen that gathered weekly and continued to expand, offering a variety of performances at local churches, retirement centers and private clubs. Encouraged by a growing and appreciative audience, the concerts were well attended and with enlarging repertoire and fine tuning, this passionate bunch was taking its place on the Olympic Peninsula as a premiere chorale.

2002 – 2021: Rebecca Rottsolk, newly retired from two decades of conducting the Northwest Girl Choir in Seattle, had just moved to Port Townsend. Pianist Lisa Lanza was hired to play for rehearsals and with her exceptional piano skills, opened up extraordinary opportunities for the group. The shift from primarily a cappella to having a dynamic director/pianist team provided a dazzling array of performance possibilities.

More auditions followed and by 2010 there were enough members to take on some thrilling choral pieces, and so with Ms. Rottsolk’s extraordinary artistic direction produced a major work – Mozart’s Requiem, with a chamber orchestra and 45 singers.

The performance of one major work prepared the way for another.  In 2014 we  gave three thrilling performances of Mozart’s Grand Mass in C Minor for St. Mary’s Star of the Sea Jubilee Celebration.

In November 2019, composer Jake Runestad was a guest conductor and led RainShadow Chorale in two of his pieces.  A brilliant piano solo of “Troubled Water” by Margaret Bonds was performed by Lisa Lanza.

2021: We were able to perform, fully masked to a masked audience, a concert entitled “The Promise of Living.”  This was the farewell concert for Rebecca Rottsolk, who retired as RainShadow Chorale’s Artistic Director and moved back to Seattle with her husband.

2022: Jolene Dalton Gailey was our guest conductor for Spring in a concert entitled, “The Illumination of my Soul” in May 2022.

Laurie de Leonne is our new Artistic Director for the Fall of 2022 in “Songs of Shakespeare”. 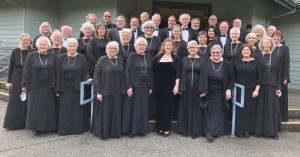 Rainshadow Chorale is here to stay with your continued support. THANK YOU to all of our friends, family and audience members and to our donors who make this all possible.

Between 1997 and 2001, RainShadow Chorale performed in a variety of venues. First Presbyterian Church, the Bay Club in Port Ludlow, Discovery View Apartments and others were our concert halls,  with free admission.

Nov 2003 – First Presbyterian, PT – “Ceremony of Carols” and “Carols and Lullabies, Christmas In the Southwest”

May 2017 – Lutheran Church of the Redeemer, Chimacum and Trinity – “Let My Love Be Heard”

of the Soul” and Mozart Requiem

Nov 2019 – Lutheran Church of the Redeemer, Chimacum “The Secret of the Sea” with Guest Conductor Jake Runestad

May 2020 – Cancelled Concert, “Old Devil Moon” due to the Pandemic

Nov 2021 — Lutheran Church of the Redeemer, Chimacum – “The Promise of Living with Hope and Thanksgiving”

May 2022 – Lutheran Church of the Redeemer, Chimacum – “The Illumination of my Soul”

November 2022 – Lutheran Church of the Redeemer, Chimacum – “Songs of Shakespeare”